If so, here's what readers are saying about Tess Williams, the hero of my Angel of Darkness Series. Check if Tess is like your favorite hero!

★★★★★
"Think Jack Reacher, blended with Girl with the Dragon Tattoo, and throw in some Nikita" Linn Caroleo

★★★★★
"Anyone who likes Jack Reacher and Sydney Rye would like this book." Sue Devers

★★★★★
"Tess is the female equivalent of The Equalizer, a very enjoyable read" Matthew Carrick

★★★★★
"Really enjoyable action packed thriller … if you like The Equalizer, you will like this character and storyline." Lisa & Andy B


★★★★★
"A female Dexter who prefers close combat to knives." Sharpen the Edge

★★★★★
"This was a good read. It was all that was promised and then some. She would make a great partner to Jack Reacher!" M.M. Taylor

★★★★★
"She is a female Jack Reacher but far far more deadly. If you like fast paced high octane thrillers where the bad people get their just desserts, then this series is for you." Biggles 66

★★★★★
"Like a female Jack Reacher but with a twist. Highly recommended." Mr. Brandon Williams

★★★★★
"I read the other reviews and being a big Jack Reacher fan found it hard to believe that there could be a female version! How wrong was I!!! Brilliant action packed book. It really is for fans of Jack Reacher!" Stephen

★★★★★
"Check out this series it's awesome. If you like the Jack Reacher books this is for you." Bryan K Roschi

★★★★★
"Great lead character, full of action and great storyline. I think Tess could be the female version of Jack Reacher." Michael

★★★★★
"Addictive! Tess can be favourably compared to Jack Reacher... you will be rooting for her after the first chapter. Great to have found such a series!" Liam McGurrin

★★★★★
"Now this is a WOW book! Action packed, fast paced, female assassin like a Jack Reacher with boobs!" Kindle Customer

★★★★★
"Love This Series. Tess as the female Reacher equivalent works for me." Ma

★★★★★
"Good reading! I'm reminded of a Jack Reacher and/or of the various lady members of Fern Michaels' sisterhood series." CentVaGal

★★★★★
"Ace. If you liked the Reacher series before they became predictable then you should love these." Amazon Customer

★★★★★
"This is a great series. Tess is in contention for the female version of Jack Reacher." Emmdee

★★★★★
"She reminds me somewhat of a female Jack Reacher!" A. Mellor

So, are you ready for some pulse-pounding action?

Then jump into the series now.

Get 3 books for the price of 2 with these box sets! 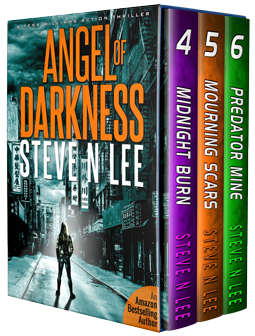