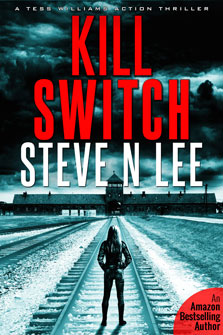 When her daughter disappears in Eastern Europe, Elena Petrescu is dragged into a nerve-shredding nightmare from which there seems to be no escape. Her only hope is Tess Williams, a young American armed with lethal combat skills.

Tess unleashes her fury on Europe’s shadowy underworld in a pulse-pounding rescue attempt. However, against a gang of bloodthirsty psychos, she struggles to save herself, let alone Elena’s daughter.

With time running out and the odds against her, Tess’s only option is to race into one final action-packed, gasp-out-loud battle. But what price is she prepared to pay to put these savage thugs down for good?

Something Awesome is Coming to Your Inbox

If you love lightning-paced plots, pulse-pounding action, and a hero with a dark past...
... you're gonna love Kill Switch!


Please enter a valid email address.
I Want It!

You'll find your book in your Inbox shortly. If you don't find it, please check your Junk folder (Gmail users check Promotions).

Something went wrong. Please check your entries and try again.

Privacy is very important to me, so I will only ever send you free books, info about my work, and other cool stuff.